These Boston-based female boxers are the definition of ‘badass’

Beyond Ronda Rousey — an unquestionable mainstream star — women rarely come up in conversation when it comes to combat sports.

But in South Boston’s Peter Welch’s Gym, women are being molded into champions. Meet four Boston-based women training for the Lowell Golden Gloves, which will take place January 2016, and read what they have to say about the sport.

Why she began competitively boxing:

“Honestly, I had always wanted to. I was like ‘I can do that.’ Women’s boxing isn’t really touched too much and I was like ‘No, I can do this. I can absolutely do this.’ I played lacrosse in college and have always been an athlete, and it’s just one of those things that as I got older, team sports were out of the question. I really wanted something competitive and at my age it was something that fit my lifestyle.’’

On women in the sport:

“For the most part, and I think it just goes along with femininity, people think female boxers are super masculine. You saw how I came here. I came into the gym dressed in little flats and earrings with my hair curled and I still have my makeup on from work. We still live a normal life. Of course, there are females that box and that’s all they do, but that doesn’t mean that they can’t go home and put on a dress. I think that’s the misconception. We would honestly put on a fight at home, crack open a beer, watch the fight on TV, and that’ll be awesome. Then we’ll shower, get ready, and meet our friends out all dressed up. Everyone associates sports with masculinity and that’s just not it.’’

What she thinks she has in common with the other female boxers:

“The fact that we all have the balls to do it…to get into that ring and spar.’’ 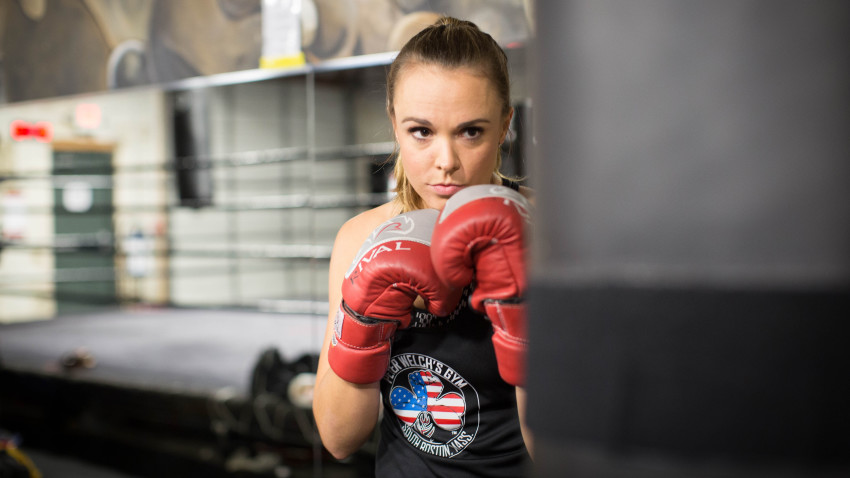 How boxing makes her feel:

[It makes me feel ] strong. When I was training for my fight, I felt my body changing in different ways. It’s funny—that Ronda Rousey quote where she says there’s not a muscle in her body that doesn’t have a purpose, well it’s the same thing with boxing. I remember my traps were getting big and I was like ‘Okay that’s good. That means my neck is stronger.’ I wear a suit to work sometimes and I felt my blazer getting tighter and I’ll be like, ‘Oh that’s kind of cool.’ As a woman, that’s weird to think, but really, it’s not.

On how others react to her passion for the sport:

“I haven’t even told my dad I’m doing the Gloves. He’s like ‘Alright, you did the charity [fight] and that’s awesome but you’re my girl, you’re so pretty, you shouldn’t be doing this, why are you doing that?’ And other people receive it so well. They say ‘That’s awesome, good for you’ and they’re so curious about it. I’ve been at dinner parties with my boyfriend and his coworkers’ wives and have just been drilled because they’re fascinated by it. It’s been put in the spotlight so much more because of people like Ronda Rousey, but aside from local people, I couldn’t even name you a nationally known female boxer and I’m in the sport. I could tell you a few that are male.’’

“Trust your own power, but protect yourself.’’

On how people view women in boxing:

“My biggest pet peeve when you tell people you fight or box is when they’re like ‘Why would you want to mess up that pretty face?’ That’s really agitating for a lot of different reasons. You don’t necessarily have to mess up your face. Boxing is a much more technical sport than people realize. My coach often compares it to chess—it’s a lot less brute forced, less trying to kill someone, and more about trying to out-smart [your opponent] and out-wit them.’’

How her view of herself has changed since taking up boxing:

“I don’t think about my body the same way anymore. I was pretty full figured. I’ve never been overweight or anything , but I wasn’t really active. Now that I’m very active and can’t really keep on a butt or boobs to save my life, I don’t really care. I care about being strong. I spend all my money on Lululemon pants so I can be comfortable in the gym. I haven’t bought new clothes in a really long time and it doesn’t matter anymore. Mentally, in terms of focusing on one thing, I’ve never focused so hard on anything in my life before.’’

Her thoughts on going pro:

“As a female it’s not worth it. Most sports are male-dominated. I can’t think of any [sport] that’s not besides figure skating and maybe tennis. The reason tennis is that way is because they put both sexes on at the same time during the tournaments and things like that. That’s also why Ronda Rousey started becoming popular—they started female MMA UFC fights at the same time on the same card as male MMA UFC fights.’’ 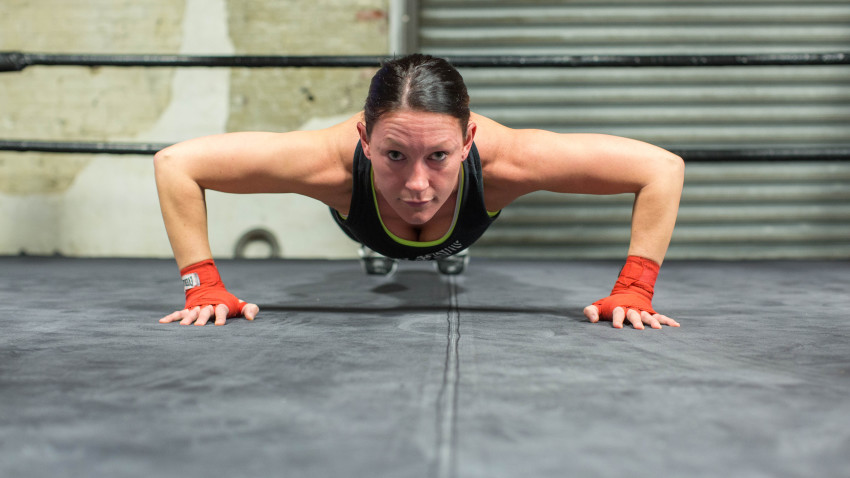 How boxing makes her feel:

“I don’t know that I would enjoy getting punched in the face, and not that I enjoy it, but I love that it’s all me. I feel strong. When I get in the ring, when I’m sparring, when I’m working out, or when I was preparing for my fight, at the end of the day it’s all me. What I put into it is what I’m going to get out of it. I’ve definitely pushed myself harder than I ever have.’’

On sparring while having a broken rib:

“It was just one. When I got the X-ray, the doctor told me it was just one. I was like ‘It still feels the same. It feels like they’re broken, so thanks.’’’

Her thoughts on competing in a male-dominated sport:

“I’ve always kind of been [in a male-dominated sport]. I played ice hockey and when I started playing there wasn’t a whole lot of girls. It certainly doesn’t deter me from trying. I hope more and more girls get into it. Some of the other girls are having trouble finding fights because there’s not as many girls that participate in the sport at a more competitive level. That was one of my concerns too. The pool isn’t very big.’’

The answers have been edited and condensed for clarity.